Today is my first step into the online blogging world.

If you are like me, it’s great to travel and explore.

However, there’s nothing worse than beautiful places that are ruined by big crowds. That’s why I want to share. About places with personal significance. Places we can reflect and have some quiet time, connecting with the real world and getting a sense of history.

Let’s start close to my home – at Abbotsford Convent and Collingwood City Farm. So close, but it’s a place of amazing natural beauty along the river, with a historic farm and a unique place in the social history of Melbourne. And it’s generally off the main tourist track, which makes it even better!

Part of Abbotsford Convent and Collingwood City Farm,
from a ridge on the other side of the Yarra River.

The Yarra River meanders through Melbourne with low gorges and grassy river banks along the majority of its length. The intersection of the river with Merri Creek was used by the Wurundjeri and Kulin Nation peoples for thousands of years as a meeting point, prior to the suburban spread of Melbourne today. Forests and grassland still run along the river even though its only 4 kilometres from the centre of the city, so it’s not hard to appreciate the natural beauty that the Aboriginal people loved and cared for in this part of the world.

The bushland forests along the river are still a haven for birds that live here.   With a little exploration and patience it’s quite easy to see some very interesting native birds so close to the city.

I once spotted a Tawny Frogmouth (Podargus strigoides) on a branch of a eucalyptus tree above the water. These rather ugly, bulky masters of disguise are not owls, but nightjars. They sleep during the day and prey on small animals, lizards and insects at night – hunting by stealth as they remain still in the treetops before swooping down for the kill.

The convent and parklands are home to a wide variety of boisterous parrots, but the Red-Rumped Parrot (Podargus strigoides) is one of the quieter parrots in the area. I’ve seen them feeding in groups on grass seed, in addition to wandering across the pathways and cycle tracks. The male is righter than the female with a bright red rump.

Merri Creek near the confluence of the Yarra River, Abbotsford, Melbourne

A unique place in the social history of Melbourne Australia

In addition to retaining connections to nature and birdlife, this area is  historical significant to Melbourne.

Imagine the 1860s: a gold rush has totally transformed Melbourne with huge population growth from 25,000 in 1850 to 500,000 in 1861. The majority of new arrivals dreamt of striking it rich with gold, but the reality was different – a small town was transformed into a big city, with all its social problems when most people don’t have a regular income.

This is a time when the church saw the social problems and opportunities to expand their reach. Four nuns from French managed Sisters of the Good Shepherd arrive in Melbourne in June 1863. Cashed up, they knew good Catholic Church real estate when they saw it – a convent was established on the banks of the Yarra River on this site.

So were the beginnings of an institution that still exists and supports the Australian community today, in a manner that has moved with the times. In Abbotsford, they built huge Victorian buildings, that would have scared young women and children who were very vulnerable in the social upheaval of gold rush Victoria.

The buildings became grander as the convent’s business enterprises expanded.  Most of these buildings can still be explored today – most notable is the Convent Bakery with its wood fired mansonry ovens, which are still in use.

Convent Cafe in morning sunshine on a clear winter day.

Despite the calm relaxed setting of the convent grounds today, life was difficult for people who lived there in the past.

The convent operated from the 1860s to 1976, largely secluded from the outside world, but also a integral part of the social and legal justice system at the time.  Women who were caught up in petty crime or unsupported by families were incarcerated against their will in the convent with the support of the legal system.  The nuns ran various enterprises with this free labour, with extensive farming activities around the main property, in addition to operating businesses like large laundries, which were used by Melbourne hotels.

The Herald newspaper reported in 1864:

It will we are sure be most gratifying to our readers and the public generally to hear that the much needed and useful institution for the reformation of fallen females at Abbotsford, under the care of the nuns of the Good Shepherd, is quietly but effectually fulfilling its mission.There are at present a large number of inmates, and in addition to the spiritual instruction they receive from the good sisters, are daily employed in the various occupations that are likely to be useful to them in after life. Needlework in all its branches is carried on, and a public laundry is being established and will be in operation in a few days. It is intended to have a conveyance and wait on families and hotels weekly, and as the nuns expect to be able In time to make the establishment self-supporting, this In itself ought to be a strong inducement to the virtue-loving public to co-operate in such a praise worthy undertaking. 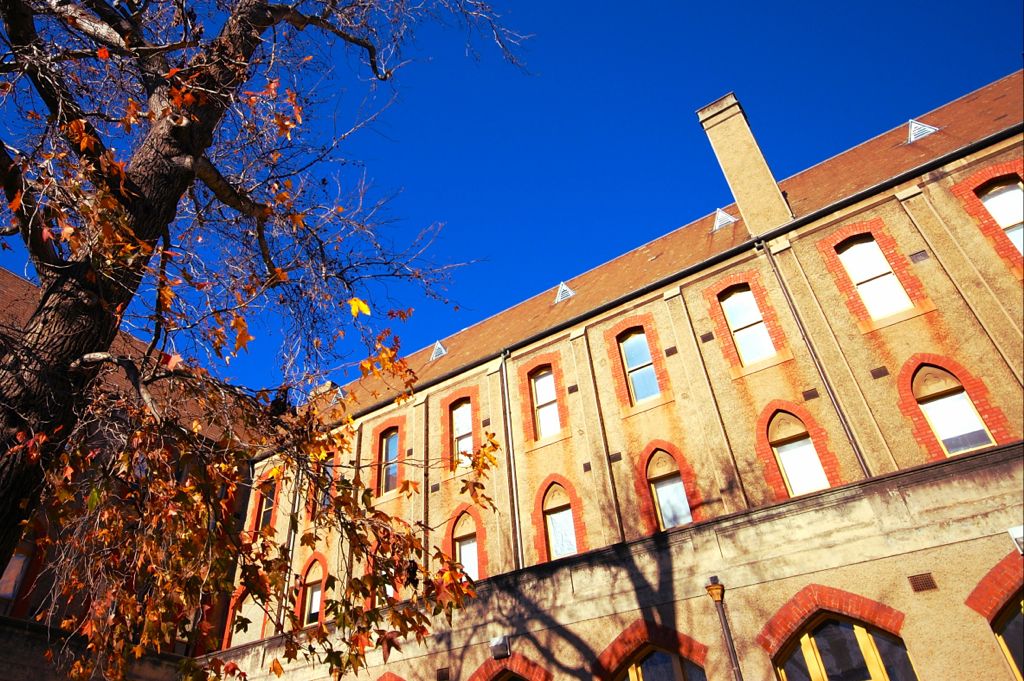 An English Oak tree, which was planted by the nuns in 1952 to commemorate QEII’s ascension to the throne.

This institution has been subsequently signalled out as a place where people who lived here suffered terribly, so it can be quite a solemn experience to wander these grounds and reflect on how lucky we are today.

But the history of this site from that time also mirrors social and environmental changes of Australia since the 1970s.  The Whitlam government funded the purchase of the site, but it always suffered from a lack of funding for upkeep of the buildings.  Up to 1989, the farmland was separated from the convent buildings, which were used by La Trobe University.

When the university departed, things took a darker turn as a major developer purchased the site with a proposal for large apartment complexes.  This proposal led to substantial community opposition with the formation of the Abbotsford Convent Coalition, which successfully battled to protect the site as a community asset for everybody in the years up to 2004.  Restoration of the site has been fairly slow, as it is large and rambling and it is largely supported by not-for-profit enterprises.

In 2017, the site gained a National Heritage Listing.  Nowadays, the site if home a lively social enterprises, art exhibitions, a farm for children and a place for community gatherings.

Getting there and Away:

Fairly amateur photographer with occasional accidental brilliance, explorer and recently becoming a freaky birdwatcher. I love exploring natural places that may be close to home in Melbourne or tucked away in far away places. Hopefully, some of my photography efforts may help other appreciate the amazing natural world around us, and how much there is to lose if the environment keeps getting destroyed. View all posts by Mark T